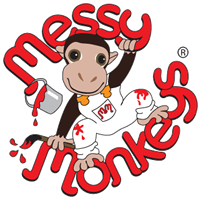 messy monkeys messy play helps babies and toddlers explore their developing senses and their blossoming creativity in a fun and safe environment.

Messy play sessions with messy monkeys are fantastic for early child development – although we have lots of fun at our classes our messy play is much more than just a giggle!  Our messy play classes are linked to the Early Years Foundation Stage so parents can see how their babies and toddlers are learning skills at every class.

Attending a messy monkeys messy play session is a great way for your baby or toddler to explore different materials and textures, learn about cause and effect and to develop motor and language skills.   Free and creative play is an essential part of a child’s learning process, assisting in the understanding of science and maths and well as developing talent in arts and crafts.

Messy play is a fabulous way of allowing young children to gain confidence in their own imagination. At messy monkeys we focus our messy play on unstructured sensory exploration allowing babies and toddlers the freedom to create their own messy masterpieces to take home each week and treasure.

Allowing children to explore different materials and textures helps them to learn about the mechanics of the world around them… it might just look like a bit of a giggle but for babies and toddlers messy monkeys messy play is serious learning!

Not only do children develop early skills in mark making, but they also gain an insight into the basics of science and maths; learning about gravity, cause and effect, the difference between liquids and solids and how different substances react in different situations.

Messy play is a fabulous way of allowing babies and toddlers to gain confidence in their own imagination rather than giving them structured, adult led activities.  By focusing on the ‘process’ rather than the ‘product’ children gain confidence in their own choices and ideas, rather than simply trying to do what they think adults want them to do.  We pride ourselves on saying “yes, you can!” to our babies and toddlers creating a super relaxed messy play environment for all our messy monkeys.

People learn new things in different ways; some visually by watching others, some aurally by listening to information and others kinaesthetically by physically doing a task.  Messy play appeals to the kinaesthetic learner who isn’t content sitting, passively listening, but would rather be physically involved. The vast majority of babies and toddlers are kinaesthetic learners, hence their enthusiasm for messy play!

There is evidence to suggest that babies who experience messy play from an early age are more open to weaning; if they are happy covering themselves with paint and rice at a messy monkeys messy play class probably won’t mind being covered with spaghetti bolognaise at meal times!  Messy play can help to minimise fears of exploring different textures, a battle some parents face in getting their babies to try new foods.

It is easy to see how plentiful the benefits of messy play are in terms of early child development and the great thing is that babies and toddlers love messy monkeys too! 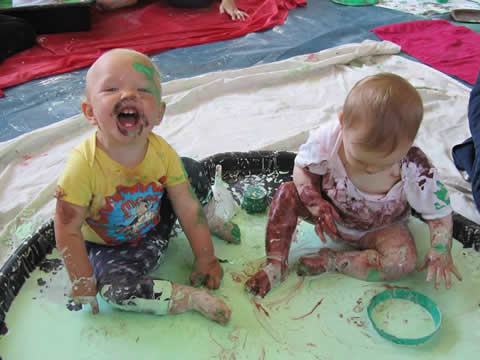 45 mins
Places at the Baby Sessions are limited allowing for a comfortable and relaxed atmosphere in which to start having some messy fun with your baby. Each session allows your child to get hands (and feet) on with different gloops and goos, explore how things work with the messy tools and have a go at creating something special to take home. 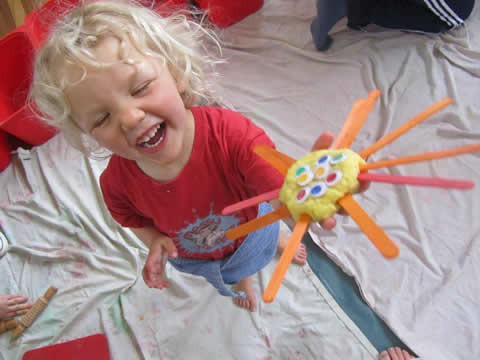 60 mins
Toddler Sessions are less structured to allow older monkeys the freedom and autonomy in their choice of Messy Play. Children have space to explore each activity at their own pace in a (relatively!) calm, relaxed environment, whilst encouraging interaction with their new friends. Create fantastic messy masterpieces to treasure within our imaginatively planned themes! 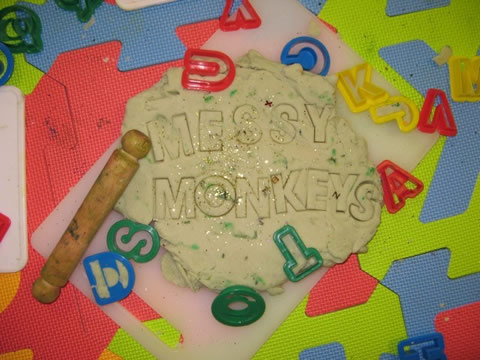 1 - 2 hours
messy monkeys offers messy parties for 1 – 6 year olds to make your little monkey’s birthday one to remember! You can choose one of our standard party packages or we can work with you to create a bespoke party around your monkeys party theme – we’ve done everything from mermaids to monsters and dogs to dinosaurs!

This website uses cookies to improve your experience while you navigate through the website. Out of these, the cookies that are categorized as necessary are stored on your browser as they are essential for the working of basic functionalities of the website. We also use third-party cookies that help us analyze and understand how you use this website. These cookies will be stored in your browser only with your consent. You also have the option to opt-out of these cookies. But opting out of some of these cookies may affect your browsing experience.
Necessary Always Enabled
Necessary cookies are absolutely essential for the website to function properly. This category only includes cookies that ensures basic functionalities and security features of the website. These cookies do not store any personal information.
Non-necessary
Any cookies that may not be particularly necessary for the website to function and is used specifically to collect user personal data via analytics, ads, other embedded contents are termed as non-necessary cookies. It is mandatory to procure user consent prior to running these cookies on your website.
SAVE & ACCEPT